Gitarre & Bass magazine published a comprehensive review for the CompIQ Twain and CompIQ Stella compressor pedals in June 2020 Issue. The article is titled with a very flattering “Intelligente Kompression” and it reveals the key features of our pedals in a concise yet very descriptive way. Here are the conclusions of the writer, Joris Henke:

It’s amazing how many options Becos FX has put in these boxes. I am not aware of any analog devices that offer a similar range of functions and, despite the numerous possibilities, they can be set quite intuitively. The combination of compression and overdrive, paired with the well-functioning tone control, brings all the prerequisites for a centerpiece on the pedalboard. It is hard to find real alternatives with so much flexibility in one device. There are already other pedals that combine distortion with compression, but with only rudimentary setting options for the compression. With the CompIQ series you don’t have to cut corners. The bottom line: it is worth it for everyone who is looking for a high-quality pedal compressor that, thanks to independent extras, leaves plenty of room for experimentation, if required.

Thank you Gitarre & Bass Magazine for reviewing our products. Read the entire review online in German Language (archived here). Below is the translation in the English Language.

On Monday, June 22, 2020, we have been contacted by a representative of PMI Media Group and being informed that the word TILT™ is a USA Registered Trademark owned by AMH Sales, Inc. DBA PMI Audio Group Corp. in Class IC 009 registration #3971079. This review was released prior to us being notified. The photography belongs to the reviewer and it was so published in the mentioned issue at a previous date. Currently, we are complying in good faith with the notification of the trademark owner and we renamed the equalization control on the Stella compressor as X-EQ. More details here.

Setting a compressor to boost the signal can be sometimes a difficult undertaking. The company Becos FX from Romania offers Twain and Stella, two compressors for bass and guitar. Their “intelligent” compressors working method promises to make this tricky adjustment work easier for the musician. The integrated overdrive circuits are intended to round off the overall package. Nowadays there are many compressors in pedal format. This makes it all the more gratifying when companies come up with new, innovative concepts to offer the musician more and more and above all, to provide new tools for sound shaping.

ROBUST HARDWARE FOR THE EVERYDAY LIFE OF MUSICIANS

Even the best sound is of little use if the device cannot cope with the demands of the everyday life of a musician. You definitely don’t have to worry about this with the two pedals Twain and Stella, because the gears are safely stored in stable, black aluminum housings. On the connection side, things are uncomplicated. The input is placed on the right side, output, and power supply on the left side, which can be a disadvantage especially with the bigger Twain, because frontal jacks usually take up less space on the pedal board. The device is supplied via the DC socket in the established format, which is flush embedded in the housing and protected against short circuits under the Out socket. The voltage here should be between 9V and 18V, although a higher voltage provides more headroom for high input levels.

SO ALIKE AND YET SO DIFFERENT

Basically both devices have a similar design. There are two signal paths that can be continuously mixed together thanks to the Dry/Wet control. The first one is the actual compressor, which works very quietly even in the most extreme settings and without its own coloration of the sound. An easy-to-read LED scale indicates to the musician the strength of the compression. The small Stella offers a compressor circuit, Twain two at once, which can be operated either cascaded or split in parallel according to frequencies. Remarkable and significant is the “intelligent” way in which the attack and release parameters work, because the devices recognize from the input dynamics whether fast or slow times are appropriate. An approximate presetting can be made with Stella via the corresponding Potentiometers. The Twain offers only one toggle switch per channel to shift between slow and fast. In practice, however, this is absolutely enough. In order to influence the sound of the compression more strongly, Stella offers a tilt EQ, which proportionally amplifies basses and at the same time lowers treble or vice versa. While this does not affect the sound in the middle position, it allows strong changes in a wiry or convex (rounded) direction if necessary. The center frequency around which it works is switchable between 330Hz and 1000Hz.

Instead, the Twain offers a crossover network which splits the signal into bass and treble and processes them separately. Unlike some other dual- or multiband compressors, the two signals are completely independent of each other and can be adjusted in timing, ratio, volume and the Threshold can be individually adapted to the requirements. For example, the basses can be compressed more than the trebles, making the sound more solid and powerful, but without losing any of its perceived dynamics and airiness. Alternatively, the crossover frequency can be bypassed and both compressor stages can be switched in series. This gives a different response and a playing feeling which is more familiar to optical or tube compressors. It is less neutral, but rounder, more pleasing and bearing. For classic rock or funk sounds this would be my choice.

COULD IT BE A LITTLE MORE?

As if that were not enough possibilities to adjust the sound, the manufacturer has given the musician yet another tool: a built-in Overdrive. The drive circuits of both devices are basically identical, rather than a low-gain range and it’s seen as an additional feature. One can confidently describe the character as transparent and open. Basses are not lost, nothing gets mushy and the mid and high frequencies are not over or under-represented. It is important to note here that the saturation only affects the uncompressed dry signal and replaces it. The labeling of the potentiometers could be a bit more explicit here, but a look into the manual will quickly provide clarification. The Twain has one overdrive per frequency band, because the crossover is always located in front of the drive, which allows an enormous number of sound variations and combinations.

Highly compressed basses paired with distorted and undistorted highs for modern metal sounds are just as doable as airy, slightly saturated vintage sounds or crystal clear sounds for slap or tap playing. Trimpoti can be used to boost the pre-amp by up to 6dB, which is good for either boosting low output instruments or “blowing” saturation. Thus the distortion can also be poached wonderfully in the high-gain range. Both pedals have an additional tone control of the distortion in the form of low and high frequency to thin out the sound or make it be less harsh. While these are directly accessible with the Twain, the Stella must be freed from the base plate and one or two jumpers must be released internally.

It is impressive what Becos FX has put into these boxes. I am not aware of any analog devices that offer a similar range of functions and can still be adjusted quite intuitively despite the numerous possibilities. The combination of compression and overdrive, paired with the well-functioning tone control, has all the requirements to be the heart of the pedal board or a stand-alone preamp. Anyone looking for so much flexibility in one device will hardly find real alternatives. Although there are already other pedals that combine distortion with compression, these focus mainly on distortion, with few basic compression settings. With the CompIQ series, you don’t have to make any concessions here. The bottom line is that it’s worthwhile for anyone looking for a high-quality pedal compressor that leaves plenty of room for experimentation when needed, thanks to independent extras. 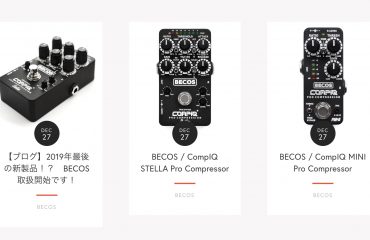